DESCRIPTION:
Burial of Emperor Nikolay II, Empress Alexandra Fedorovna and their daughters and servants.
On 17 July 1998, as directed by the Russian government, a funeral ceremony was held in the St. Peter and Paul Cathedral for the remains recovered near Ekaterinburg that, according to the statement of the Government forensic commission, belonged to Emperor Nicholas Il, Empress Alexandra Fedorovna, their daughters Grand Duchesses Olga, Tatiana and Anastasia, their family doctor Evgeny Botkin, and three servants: chef Ivan Kharitonov, butler Aloisiy Trupp and chambermaid Anna Demidova. The remains of the two other children of Russia’s last emperor: Crown Prince and Grand Duke Alexey Nikolaevich and Grand Duchess Maria Nikolaevna were reported never found.
President of the Russian Federation Boris Eltsin, members of Government and State Duma, diplomats and over 50 representatives of the Romanov family attended the ceremony. Coffins were lowered in one crypt. This ‘common grave’ was divided into two tiers. The upper one was for the Imperial Family. As the remains descended to the grave, the artillery gave a salute of 19 shots. A common tombstone was installed over the grave, and memorial boards with inscriptions fastened to the chapel walls to the design by architects Andrei Gunich and Svetlana Nalivkina. The St. Catherine Chapel of the St. Peter and Paul Cathedral where the last crowned Romanovs found repose, used to be a burial place before. Peter I’s sister-in-law, Tsarina Martha Matveevna was buried here on 7 January 1 716.
The last Emperor of Russia, Nicholas I l Alexandrovich, his wife, Empress Alexandra Fedorovna, Crown Prince Alexey Nikolaevich, Grand Duchesses Olga, Tatiana,
Maria and Anastasia were executed by the Bolsheviks in Ekaterinburg the night of 16/17 July 1918 together with their doctor and servants. In 1981 the Russian Orthodox Church Abroad canonized Emperor and his family as saints, and on 20 August 2000, the Moscow Patriarchy recognized them as martyrs.
 (text from location) 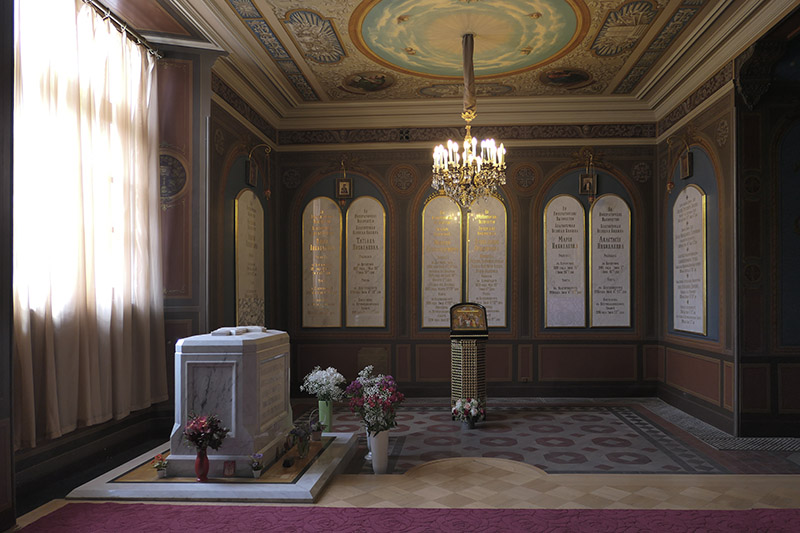 DESCRIPTION:
On September 28, 2006, 78 years after her death, Maria Feodorovna, Empress of Russia, was reinterred in the Cathedral of St Peter and Paul. Wife of Tsar Alexander III, and mother of Nicholas II (the last Russian tsar), Maria Feodorovna died on 13 October 1928 in exile in her native Denmark and was buried in Roskilde Cathedral in Denmark. In 2005, the governments of Denmark and Russia agreed that the empress’s remains should be returned to Saint Petersburg in accordance with her wish to be interred next to her husband”.
size in pixels:  5472×3648
size in mb:  8,46 DESCRIPTION:
Tombstones marking the burial of Tsar Nicholas II and his family in St. Catherine’s Chapel. Of the post-Petrine rulers, only Peter II and Ivan VI are not buried here. Peter II is buried in the Cathedral of Michael the Archangel in the Moscow Kremlin; Ivan VI was executed and buried in the fortress of Shlisselburg or Kholmogory (alleged discovery at Kholmogory in 2010 currently under forensic investigation).
size in pixels:  1600×1199
size in mb:  1,33