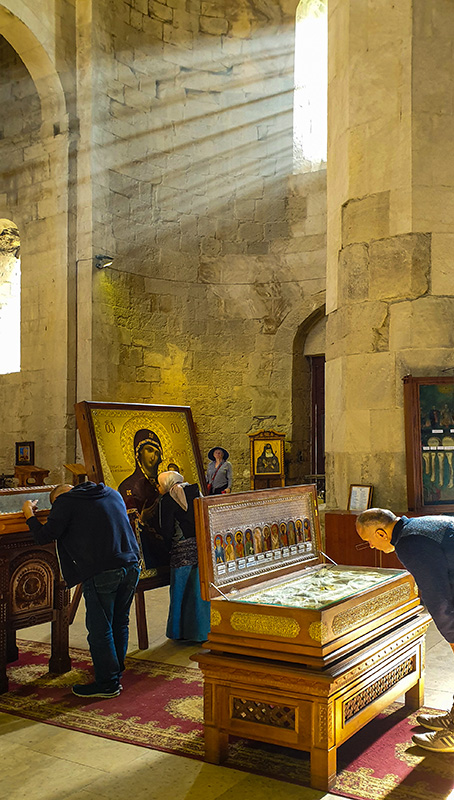 EXTRA:
larger .tif file available
You can order a ARCHIVAL PRINT of this photograph!

DESCRIPTION:
In 1994, the Bagrati Cathedral, together with the Gelati Monastery, was included in the UNESCO World Heritage Site list as a single entity. In 2001, the cathedral was restored to the Georgian Orthodox Church. It is now of limited use for worship services but attracts many pilgrims and tourists. Being one of the main tourist attractions Bagrati Cathedral is frequently used as a symbol of the whole city of Kutaisi.
www.georgianholidays.com

Bagrati Cathedral in Kutaisi – Georgian Holidays
The cathedral gained Unesco World Heritage listing in 1994 following intermittent restoration efforts through the 20th century. Ironically, the 21st-century renovation put it on Unesco’s World Heritage in Danger list, due to threats to the ‘integrity and authenticity of the site’, a status that has been removed with the redrawing of the boundaries of the heritage site, which now exclude the cathedral itself, and include only the Gelati Monastery, 8km outside the city.
The palace-citadel immediately east of the cathedral dates back to the 6th century. It was wrecked in 1769 during Georgian-Russo-Turkish wars, but you can discern remains of wine cellars and a church.
lonelyplanet.com › poi-…
Bagrati Cathedral | Kutaisi, Georgia Attractions – Lonely Planet

EXTRA:
larger .tif and file available
You can order a ARCHIVAL PRINT of this photograph!

DESCRIPTION:
The Cathedral of the Dormition, or the Kutaisi Cathedral, more commonly known as Bagrati Cathedral (Georgian: ბაგრატი; ბაგრატის ტაძარი, or Bagratis tadzari), is an 11th-century cathedral in the city of Kutaisi, in the Imereti region of Georgia. A masterpiece of the medieval Georgian architecture, the cathedral suffered heavy damage throughout centuries and was reconstructed to its present state through a gradual process starting in the 1950s, with major conservation works concluding in 2012. A distinct landmark in the scenery of central Kutaisi, the cathedral rests on the Ukimerioni Hill.
wiki
Bagrati Cathedral – Wikipedia

Bagrati Cathedral in Kutaisi. (National Agency for Cultural Heritage Preservation.)TBILISI, DFWatch–
The controversial restoration of Georgia’s historic Bagrati Cathedral has been awarded the international prize Domus Restoration and Conservation. According to the jury, ‘the intervention of critical reintegration of Bagrati Cathedral, one of the greatest episodes of Georgian architecture of the eleventh century, is an example of the efforts made by the architect Andrea Bruno to solve the complex relationship between ‘old and new ‘, through a key reading original re-integration.’ The jury will hold an award ceremony March 20, 2013, at Palazzo Tassoni, Ferrara, Italy, for the two winning projects.
Bagrati Cathedral was built sometime between 975-1014 in Kutaisi, the second-largest city in Georgia. According to historic sources, the cathedral was destroyed in 1692 by the Ottomans. In 2009, on President Mikheil Saakashvili’s initiative, rehabilitation work was started, as the president said it was necessary to build a dome for the cathedral; however, this idea was criticized as many claimed it would destroy the authenticity of the building. Those against the rehabilitation claimed that even though the cathedral didn’t have a roof, it had retained its historical appearance and authenticity and in summer or in a good weather people still went there to pray; even to get married. In 2010, the World Heritage Committee placed Bagrati Cathedral on its list of endangered world heritage and the reason was the start of reconstruction work violating the authenticity of the building. The status of Bagrati is still under review and isn’t final, but meanwhile, the Cathedral has been fully reconstructed and now has a light green dome and modified interior. In 1994, Bagrati Cathedral was placed on UNESCO’s World Heritage list.

The Cathedral of the Dormition, or the Kutaisi Cathedral, more commonly known as Bagrati Cathedral, is an 11th-century cathedral in the city of Kutaisi, in the Imereti region of Georgia
Wikipedia

In 2010, under the leadership of an Italian architect Andrea Bruno, Georgia commenced reconstruction works aimed at returning Bagrati Cathedral to its original state as a religious space. In July 2010 UNESCO added Bagratli cathedral to its list of endangered world heritage sites in part because of the continuing reconstruction, which it feared would affect the structural integrity and authenticity of the site. Even before the reconstruction works, in 2008 ICOMOS was concerned about the deteriorating state of Bagrati, but it commended that any conservation efforts by the Government should not include a type of reconstruction which would affect the site’s historical value. In 2011 UNESCO urged the Georgian government authorities to develop a rehabilitation strategy that would reverse some of the changes made to the site in recent years, but it acknowledged that these alterations may be “almost irreversible”. In 2013, architect Andrea Bruno was awarded a Georgian state gold medal for his role in the Bagrati Cathedral reconstruction and was subsequently recognized for this project with the University of Ferrara Domus International Prize for Restoration and Conservation. UNESCO removed Bagrati Cathedral from its World Heritage sites in 2017, considering its major reconstruction detrimental to its integrity and authenticity.