“Tiananmen Square is the geographical centre of Beijing City. It is the largest city square in the world, occupying an area of 440,000 square meters (about 109 acres), and able to accommodate 1,000,000 people at one time.”

(pfs4873)
The Beijing Ancient Observatory is one of the oldest observatories in the world. A lot of observatories came into being at the same time, such as Royal Greenwich Observatory (converted to a museum in 1998) and the Observatoire de Paris.

(pfs4874)
In 1421 (19th year of Yong Le), the Ming Dynasty moved its capital to Beijing. the Observatory was built along the city wall and equipped with an Armillary Sphere, an Abridged Armilla (skeleton globes made up of rings used to plot the positions of stars and planets) and a Celestial Globe (conceptualizes the heavens as a sphere and has the mayor stars marked on it. The Forbidden City was also built at that time. The ‘Gui Ying Tang’ with gnomon and clepsydra (water clock) were built four years later. This is how the buildings and equipment of the Beijing Observatory were established in their entirety.

(pfs4875)
After the qing Dynasty moved its capital to Beijing in 1644 and following Johann Adam Schall von Bell’s advice, the Chinese began to use the western computation standard and measuring system. During 1669 – 1674, following the orders of Emperor Kang Xi, Ferdinand Verbiest designed 6 new astronomical instruments (used to plot the position of the stars). Later, in 1715, Kilian Stumpf designed another instrument: the Azimuth Theodolite (an instrument, sometimes called a theodolite, that can measure both vertical and horizontal angles at the same time). In 1744, Emperor Qian Long ordered the construction of another instrument: the new Armilla. (skeleton globes made up of rings used to plot the positions of stars and planets). This is how the astronomical instruments in the Observatory came into being.

9pfs4877)
The 6 new astronomical instruments: The Equatorial Armilla, the Ecliptic Armilla (skeleton globes made up of rings used to plot the positions of stars and planets – the Equatorial Armilla based on the projection of the earth’s equator into the heavens, the Ecliptic Armilla based on the path of the sun through the sky against the background of distant stars), the Quadrant (a quarter of a circle with a degree scale used to measure the altitude of a star or planet), the Celestial Globe (a spere with the mayor stars marked on it), the Sextant (a sextant is a sixth of a circle, scaled up to 60 degrees, used to measure the angular distance between the stars or between a star and the moon) and the Altazimuth (a horizontal circle with sights used to measure the horizontal angle).

(pfs4905)
Johann Adam Schall von Bell, (1592 – 1666)
A Jesuit missionary from Germany, came to China in 1619, he participated in the translation, compilation of ‘Chongzhu Lishu’ an astronomical encyclopaedia of the Chongzhen period) and was appointed as the director of the Imperial Astronomy Bureau in the first year of the ShunZhi period (1644 AD). He made a number of astronomical instruments including an armillary sphere, horizon-sundial, and a telescope. He also wrote a book called ‘Yuanjing Shuo’, introducing the details of the western telescope.

(pfs4912)
About 4000 – 5000 years ago, Mercury, Venus, Mars, Jupiter and Saturn aroused the curiosity of the ancients. In “Shi Jing” (the Classic of Poetry) we find the verse: “Venus alights the eastern sky in the morning and the western sky at dusk.”. The ancient Chinese found that the five planets apparently moved against the background of the stars, sometimes from east to west, sometimes in the opposite direction and even sometimes remaining still. After diligent observation, that was able to discover the rule behind these movements.

(pfs4913)
The 28 Xiu (lunar lodges) were also divided into 4 parts, with each part consisting of 7 Xiu. In the east was Cang Long (Blue Dragon), in the South was Zhu Que (Red Bird), Bai Hu (White Tiger) was to the West and Xuan Wu (Black Tortoise) was to the North. Together, these were the four animal images used to represent the cardinal directions and to divide the stars.

Zhang Heng (78 – 139 AD) was a prominent astronomer during the Han dynasty. His two most important publications were ‘Ling Xian’ and ‘Hun Tian Yi Tu Zhu’. These outlined Zhang’s view of the universe – Theory of Sphere-heaven. He was also the inventor of the armillary sphere and the world’s first seismometer.
Zhang Heng contributed a great deal to Chinese astronomy in astronomical theory, observation and instrument manufacture.

Western Astronomy during the Renaissance Period
From the 14th century AD to the early 17th century AD, there was another cultural resurgence in Europe, the greatest since the great Greek and Roman civilizations: the Renaissance. It spanned over 300 years in the history of Europe and was the forerunner of capitalism. Famous astronomers such as Nicolaus Copernicus, Tycho Brahe, Johannes Kepler, Giordano Bruno and Galileo Galilei, who were the founders of western astronomy, all lived during this period.

Western Astronomy in the “Chongzhen Lishu”
A major work of mathematical astronomy, the 137 volume “Chongzhen Lishu” (Astronomical Encyclopaedia of the Chongzhen Period), was produced over a period of five years from September in the second year of the Chongzhen period until November of the seventh year of that period. This work of mathematical astronomy was due to the efforts of the Jesuit missionaries: Nicolas Longobardi (1568 – 1644), Johann Terenz (1576 – 1630), Johann Adam Schall von Bell (1591 – 1666) and Giacomo Rho (1593 – 1638). These authors helped make “Chongzhen Lishu” become the first book to help spread European Astronomy across China.

pfs4891
the “Square table”
Designed by Guo Shoujing, a Chinese astronomer of the Yuan Dynasty (1279 – 1368), it was made for the purpose of determining the azimuth of celestial bodies by the equal altitude method and can also be used as a protractor. This reproduction was made in 1983 according to data recorded in “The History of the Yuan Dynasty”.

Stardial (Gouchen Gui) is a timing device for observing fixed stars at night to determine the time. It was first used in the Tang Dynasty.

Made in 1489 and used for the same purpose as the Armillary Sphere, it is simpler in structure and operation. It was moved to the Purple Mountain Observatory in Nanjing in 1938.

‘Talking about Skies’
a turning point in modern Chinese Astronomy
In 1849, John Frederick William Herschel (1792 – 1871), son of Frederick William Herschel (1738 – 1822), wrote the famous work called “Outlines of Astronomy”, which included all the achievements of western astronomy of that time. The Chinese mathematician Li Shanlan (1811 – 1882) translated it into Chinese and it was called “Talking about skies”. Li Shanlan worked in cooperation with the Jesuit Missionary Alexander Wylie (18815 – 1887), and the translated work was first published in 1859 and consisted of 18 volumes …
Many astronomical discoveries were mentioned in this book: annual parallax, aberration, asteroid, Uranus, Neptune etc. In his preamble, Li Shanlan emphasized that the sun-centred (heliocentric) planetary system nad the elliptical orbits of the planets around the sun had been proved to be true and were not just theories. It was the first time that modern western astronomy became widely known in China. 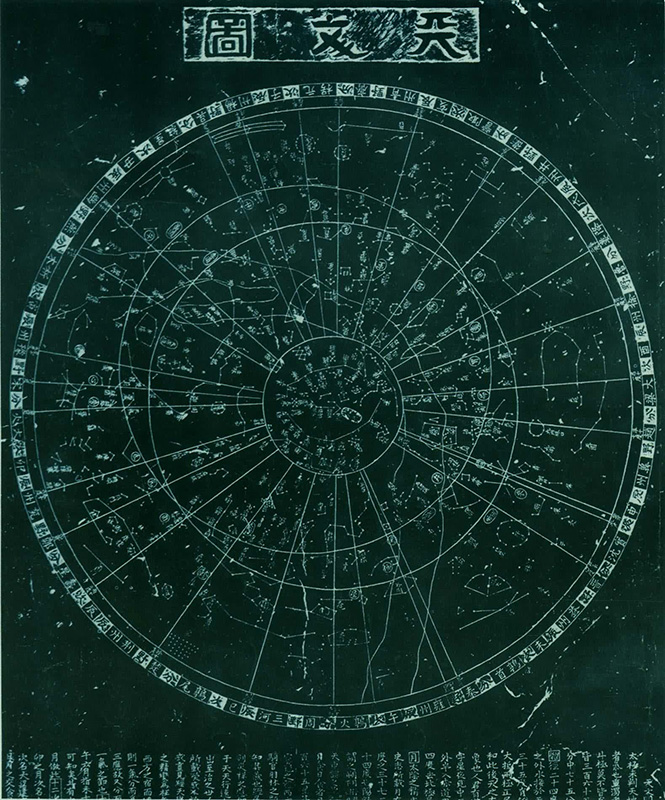 Moondial (TaiYin Gui) is used to determine time through observation on the directional changes of the moon. It consists of two concentric disks and a vernier in the centre. The vernier is used for indicating the time according to the moon.

The Beijing Ancient Observatory was first built in 1442 and was the national observatory during the Ming (1368 – 1644) and Qing (1644 – 1911) Dynasties. With a platform standing around 14 meters in height, and with a length and breadth of 23,9 meters and 20,4 meters respectively, it is one of the world’s most revered astronomical observatories. It has an observation history of nearly 500 years to 1929 and upon it are situated eight famous intact and integrated Qing Dynasty astronomical instruments. These eight instruments demonstrate early cultural exchange with their combination of western technology and Chinese artistic design. The Observatory became a State Protected Historic Site in 1982.